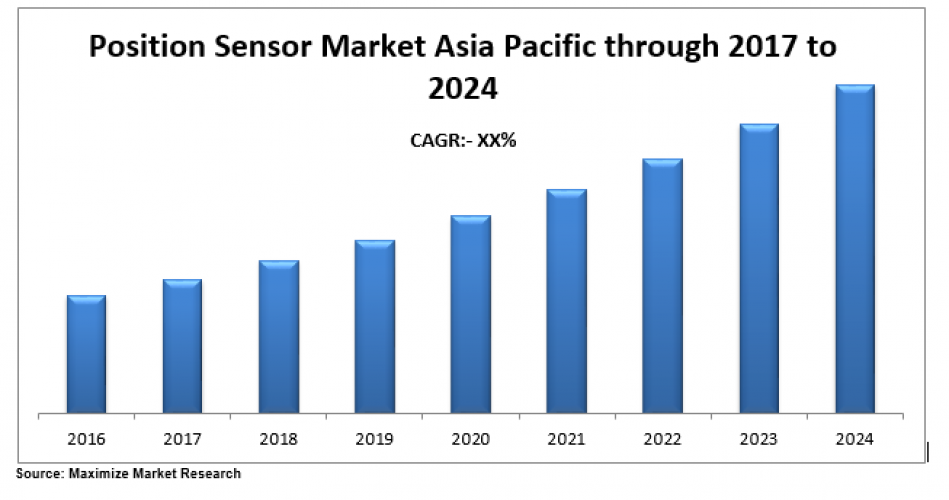 Asia Pacific Position Sensor Market Sensors are an extremely important component of any measurement system. It is used for collecting data from the surroundings or any other physical parameter to provide an electrical signal as the overall input to the systems. The most common ways of classifying the huge spectrum of sensors is actually based on the specific application of the sensor. The position sensors are basically special sensors that are used for measuring the distance traveled by the object starting from its reference position. It determines how far the body has moved from its initial position which is sensed by the position sensors and the output is often given as a feedback to the control system which in turn takes the appropriate action. The motion of the body can be both rectilinear and curvilinear and accordingly these position sensors are called linear position sensors or angular position sensors.

The Position Sensor market in Europe is classified into type, contact type, output, application, industry, and geography. By type, the market is divided into rotary and linear position sensors. Based on contact type, the market comprises contact and non-contact. On the basis of output, the market includes digital and analog. Robotics, material handling, test equipment, machine tools, motion systems, and packaging are the various application areas for position sensors market. On the basis of industry, the market comprises consumer electronics, automotive, healthcare, aerospace, packaging, and manufacturing.

Since being introduced in China from the mid-1970s, the remote sensing science and technology have made rapid advancements and now are a major part of the country's economic development. Companies present in China focus on precision displacement measurement and at the metrology applications using complex electronic designs for executing complex mathematical algorithms. Unlike other inexpensive sensors, the advanced high-performance sensors give outputs that are linear, almost stable with temperature, and are quickly able to determine incredibly small changes in the target position that results in high-resolution measurements. These special sensors are basically position measuring devices. Their outputs constantly indicate the size and position of the gap between the sensorâ€™s probe and the final target. While the probe may be stationary, but any changes in the final output are directly interpreted as the final changes in the position of the target. These trends overcome problems and help in:

â€¢ Final assembly of precision equipment such as disk drives

The widest range of high-dynamics, as well as high-resolution nano-positioning systems, is available worldwide. The linearity and repeatability are not possible without highest-resolution measuring devices. The accuracies in the overall range of a few nanometers or below require a position measurement method that helps in detecting motion in this range. The most important specifications that are needed for choosing a suitable method include linearity, resolution or sensitivity, stability, bandwidth, and costs. The contact sensors with the movable parts further affect the overall measuring result with using the non-contact measurement methods as far as possible.

Maximize Market Research provides B2B and B2C research on 20,000 high growth emerging opportunities & technologies as well as threats to the companies across the Healthcare, Pharmaceuticals, Electroni..